Exporting hydropower production can provide emerging market countries with the opportunity to develop hydropower projects that would otherwise be unavailable due to project bankability concerns or the inability to attract investors. Host governments and utilities also receive significant benefits through such export projects, as discussed in a previous King & Spalding article, Host Country Benefits of Export Projects.

However, while export projects may provide an attractive option to some countries, they also bring added risk when compared with projects whose entire production is sold in the domestic market ( domestic HPPs ). These risks need careful consideration from all of the project stakeholders, including governments and utilities, to ensure project development and operation can proceed as planned. This article describes some of the added risks of export projects versus domestic HPPs.

The ability of an export project to realise its forecasted revenue depends on the timely completion of a transmission line that will interconnect the export project (and/or the transmission system within the host country) with a counterparty in the neighbouring country. This could expose the export project to additional land acquisition and construction delay risk when compared with domestic HPPs, since the export project would depend on successful completion of essentially separate projects, processes and/or contractors on each side of the border. For export projects whose interconnection traverses more than one country ( e.g., Inga 3 in the Democratic Republic of Congo, which when complete will deliver 50% of its production through an interconnection that traverses Zambia and Zimbabwe before delivering electricity to South Africa), this risk grows exponentially, and can become one of the biggest challenges for export projects.

To mitigate this risk, stakeholders may consider having a common ownership structure, project development company or construction contractor for the project segments in each country, all of which can, to varying degrees, streamline control and/or insight into any issues arising across the various borders. Stakeholders will also want to see government-to-government treaties or other agreements that confirm each governments intent to support the timely completion of the interconnection. And in the case where the intended offtaker fails to complete its portion of the interconnection in accordance with the agreed schedule, lenders will want such offtaker to begin remitting payments upon completion of the export project.

Allocation of political risk ( e.g., changes in domestic policy, law or regulatory framework, government actions, trade barriers, changes in tax, etc.) also represents a major issue for export projects. On a practical level, stakeholders usually exert significant effort aligning governments and regulatory regimes on each side of the relevant border to facilitate cross-border power trade in advance of commercial operations. This often includes (i) ensuring the governments enter into an international treaty to confirm support for the project, as well as to allow recourse under such treaty if either government interferes with the project; (ii) involving multilateral institutions in cross-border power trade initiatives; (iii) harmonising the grid code and other transmission requirements between interconnected countries; and (iv) establishing common operational / communication procedures between grid system operators. This is all to reduce regulatory and other political risk and ensure that the project operates as intended.

As an additional political risk mitigant between export energy buyers and sellers, export projects need to ensure that the cross-border power trade or power purchase agreement ( PPA ) and relevant concession agreements expressly allocate to each counterparty the risk of actions by its own government. For Nam Theun 2, for example, the project documents allocate Thai political risk to the Thai public utility EGAT under its PPA, and Laos political risk to the Government of Laos under a concession agreement. Similarly, under the power trade agreement between Sarawak Energy Berhad of Malaysia and PLN of Indonesia, neither party bears political risk on the other side of the border, nor benefits from the acts of its state that may affect the commercial deal. The export project can also mitigate cross-border political risk by making power under the PPA available at the connection point between the transmission line within the host country and the interconnector on a take-or-pay basis. This ensures that the project company receives payment for power available at that point within the host country, regardless of whether a political risk event occurs on the other side of the border.

If the export project involves transit countries, then the PPA will need to take into account political risk events that may occur in each such transit country that prevents transmission of electricity to the importing country or otherwise affects the commercial deal. For example, the PPA could provide that the offtaker continues to pay for power not taken during a transmission constraint in a transit country, an outcome which then requires the offtaker, or its government on its behalf, to recover any losses from the transit country under the relevant treaty or agreement. Figure 1 below sets out a simplified example of the consequences of a supply interruption caused by a political risk event occurring in each of the countries involved in an export project. 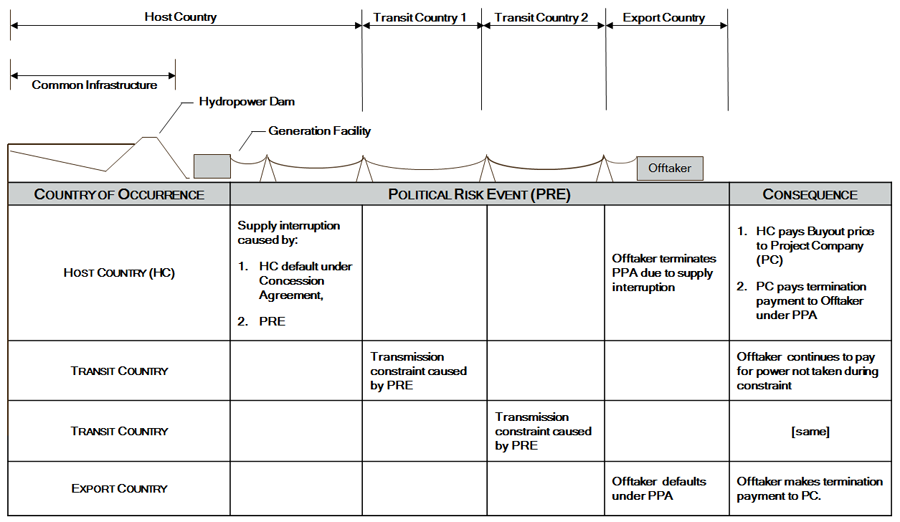 While export projects face a number of added challenges arising from the mixed domestic and cross-border nature of the projects, stakeholders can manage each of these risks (and have done so before) with a considered approach each step of the way, including as set out above. In doing so, they can ultimately reap the additional benefits of a successful hydropower export project versus a domestic HPP, including the host country benefits described in our previous article, Host Country Benefits of Export Projects.

The authors published a version of this article as an IHA Briefing in December 2016.

Offshore Wind in Taiwan: A Budding Asia-Pacific Hub About to Undergo Bankability Testing