Offshore Wind in Taiwan: A Budding Asia-Pacific Hub About to Undergo Bankability Testing

Taiwan has been taking steps to show that it “means business” when it comes to the development of its nascent offshore wind industry. This push has gathered pace in the past year with international project developers and investors starting to pile in to seize opportunities and position themselves in what is expected to be an important growth area in Asia Pacific. Between 2017 to 2024, Taiwan plans to mobilize private investments in its wind industry of more than US$15bn. To make this possible, bankability of upcoming projects will be crucial.

This article summarises recent developments in Taiwan and discusses key bankability issues relevant to the financing of offshore wind projects.

Taiwan is currently re-inventing its energy mix to move away from a model predominantly based on coal and nuclear (45% and 16% of the total generation capacity, respectively) for environmental and policy reasons. These drivers were reflected in January of this year through the enactment of a law that phases out nuclear energy by 2025 and aims to increase the share of renewable energy from 4.8% to 20% of total generation capacity.

Taiwan has existing onshore wind capacity of approximately 640 MW. However, due to land constraints related to Taiwan’s high forest and mountain coverage, installed capacity is not expected to grow beyond 1.2 GW in the medium term. Following a trend seen in Europe, Taiwan’s focus on wind has therefore shifted to offshore projects thanks to Taiwan’s excellent wind profile in coastal areas on the Taiwan Strait. By 2025, Taiwan targets total offshore wind capacity to reach 3 GW. Beyond that 2025 target date, the potential for offshore wind in Taiwan is estimated to be in excess of 15 GW.

Taiwan has taken several steps in recent years to kick start offshore wind development and attract private investment. The two principal measures consisted in grants to domestic companies for demonstration projects launched in 2012 and the setting-up of a new regulatory framework due to offer 20-year feed-in-tariffs from state-owned utility Taipower. Instead of formal tenders, Taiwan has designated 36 “Zones of Potential” (later reduced to 22) in which developers can present projects for approval.

These measures have been topped by the recent announcement of US$20bn in public investment commitments to development of wind power (onshore and offshore) under the Ministry of Economic Affairs’ 8-year green energy development plan (2017-2025). These commitments include US$6.6bn for wind farm infrastructure (through Taipower), investments in port infrastructure (US$260m) and a database for wind turbine verification (US$30m).

While the development of a domestic industry with local know-how forms part of Taiwan’s strategy (such as the creation of a consortium of Taiwan government backed enterprises, research bodies and local marine engineering companies), collaboration with experienced international players is recognized as a condition to success. It is also part of Taiwan’s objective to position itself as a hub for the Asia-Pacific offshore wind market and encourage international industry participants to partner with Taiwanese companies when exploring other markets in the region.

In January 2017, leading offshore wind developer DONG Energy and Macquarie Capital entered into an agreement to acquire 35% and 50%, respectively, of the 128 MW Formosa I project. Originally developed by Swancor, a publicly listed company in Taiwan manufacturing specialty chemicals, the Formosa I project was one of three pilot projects that received government support under the 2012 grant programmes. Today, this is the most advanced project, having already received a commercial operating license for its 8 MW phase 1.

Separately, DONG Energy has been directly developing four projects of its own, with a reported objective of developing 2 GW of capacity in Taiwan.

In May 2017, the Copenhagen Infrastructure Partners (CIP) fund acquired three offshore wind projects (1.5 GW of combined capacity) that were developed by Taiwan Generations Corp., a private Taiwanese developer that was also the recipient of government support under the 2012 grant programmes.

Other international developers that are reported to be active in Taiwan include Canada’s Northland Power, Singapore-based Enterprize Energy and France’s developer of floating turbines EOLFI.  Specialist international consultancies (e.g. NIRAS, Aqualis Offshore) are also reported to be setting up in Taiwan, which helps create a supportive environment for the industry. Investment firm Partners Group is also reported to have expressed interest in investing in projects that are at the late permitting stage and nearing financial close.

Offshore wind is new for Taiwan but commercial scale projects have been operating in Europe since the early 2000s. Initially, developers and sponsors in Europe would fund these projects using their own balance sheet and sell a stake in the project company after the commencement of commercial operations. Since then, a large number of commercial banks in Europe and in the U.S. have gained experience lending to offshore projects and construction financing is available for well-structured projects (more than €7bn of non-recourse debt structured in 2016 for projects in Europe).

The Formosa I project is reported to be seeking US$500m to fund its 120 MW phase 2. This is likely to be the first bankability test for the upcoming raft of offshore wind projects in Taiwan. Consistent with the European precedent, multilateral finance organizations and export credit agencies (EKF of Denmark, KfW-IPEX Bank of Germany, for example) are expected to play an important role in these financings alongside domestic and international commercial banks.

Notably, as part of the recent Europe-Taiwan Wind Energy Conference, KfW and the European Chamber of Commerce entered into an MoU with the Taiwan Academy of Banking and Financing to share expertise and know-how in offshore wind project financing with Taiwanese bankers. Taiwan’s Bureau of Energy also floated the idea of mandating Taiwanese state-owned banks on the financing of offshore wind projects to ensure adequate funding is available for these projects. This European experience and track record should help Taiwan’s first offshore wind projects access project financing, though this remains to be tested and will depend on ongoing and effective support to the industry from the government.

Below is a high-level description of some of the key construction risks and potential mitigants at play for offshore wind projects: 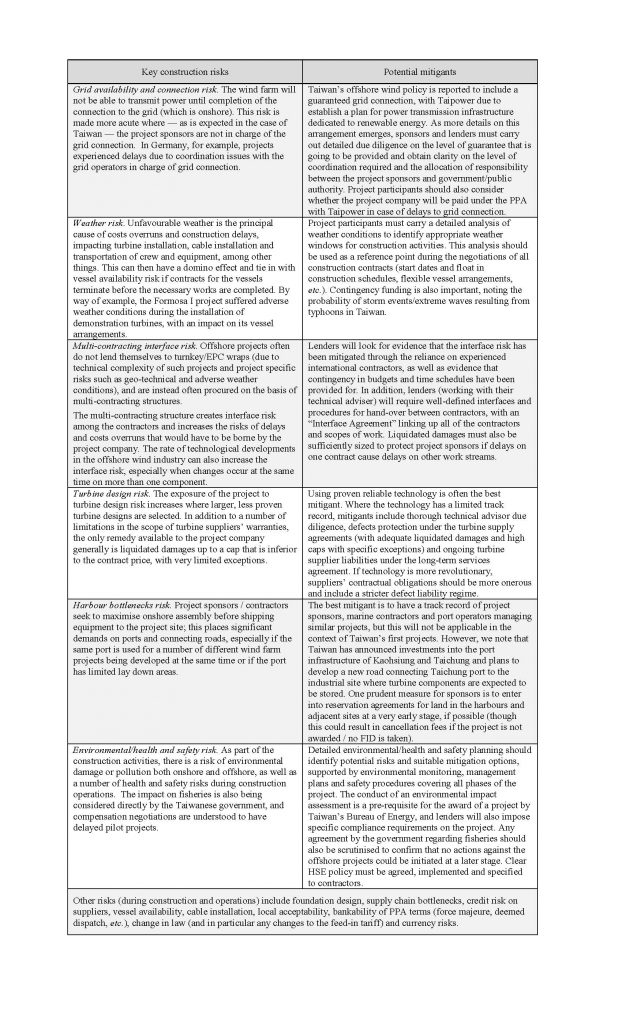 Taiwan promises to be an exciting beachhead for the development of offshore wind in Asia Pacific. International and domestic sponsors and lenders will need to carefully analyse and mitigate the risks noted above for the projects to be bankable and successful, drawing on lessons learned from other more developed markets.

The Small Matter of Bankability: Small-Modular-Reactors and the Financing of Nuclear Projects