On December 15, 2021, the Securities and Exchange Commission (“SEC”) proposed new rules regarding Rule 10b5-1 plans and disclosure requirements for company share repurchases.

The proposal regarding Rule 10b5-1 plans would, among other things, add new conditions to the availability of the affirmative defense under Rule 10b5-1 and create new disclosure requirements for company insider trading policies, as well as for the adoption, modification and termination of Rule 10b5-1 plans by directors, officers and issuers.

The proposed share repurchase disclosure rules would require more frequent and timely disclosure of both open market and private repurchases of an issuer’s equity securities, including on a new Form SR for each day that an issuer or an affiliated purchaser makes a share repurchase.

Both the Rule 10b5-1 proposal and the share purchase proposal will be subject to an unusually short 45-day comment period that will expire in mid-February 2022. After the end of the comment periods, the SEC may be likely to move quickly to finalize rules – particularly in the case of the long-anticipated Rule 10b5-1 updates.

The proposal for the Rule 10b5-1 changes is available here. The press release and the fact sheet can be found here and here.

The proposal for the share repurchase disclosure changes is available here.  The press release and the fact sheet can be found here and here.

The federal securities laws prohibit trading of securities by individuals in possession of material, non-public information (“MNPI”). For corporate executives, directors and other insiders with regular access to MNPI, trading in company securities is particularly challenging. Recognizing these challenges, in 2000, the SEC adopted Rule 10b5-1, which created a safe harbor to enable the purchase and sale of securities by insiders through pre-established trading plans. Commonly known as a “Rule 10b5-1 plan”, these plans, if valid, establish an affirmative defense to insider trading allegations.  To be valid, a Rule 10b5-1 plan must be entered in good faith and cannot be a plan or scheme to evade the prohibition against insider trading. Plans may only be entered when the insider is not aware of MNPI, and the insider (or any other person with MNPI) cannot exercise any subsequent influence over how, when or whether to effect purchases or sales.  Rule 10b5-1 plans have been widely used by company insiders, as well as by issuers repurchasing stock, in the two decades since the SEC adopted the rule.

The proposed amendments also provide that the Rule 10b5-1(c) affirmative defense does not apply to multiple overlapping plans in the same class of securities. The restriction on multiple overlapping 10b5-1 trading arrangements is designed to prevent persons from devising schemes to exploit inside information by setting up pre-existing hedged trading programs, and then canceling execution of the unfavorable side of the hedge, while permitting execution of the favorable transaction. 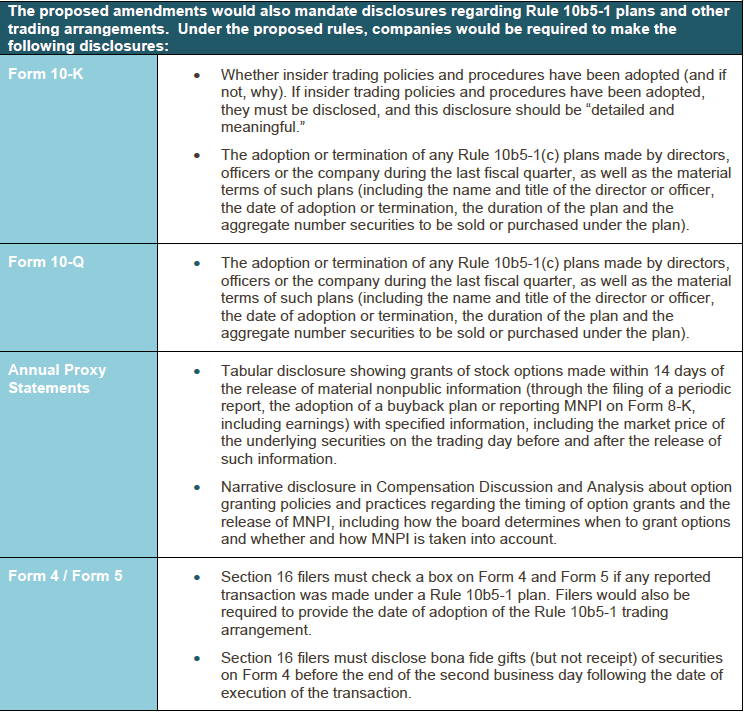 Companies are currently required to disclose certain specified information about share repurchases on a quarterly basis in periodic reports. For the relevant quarter, companies must disclose in a tabular format (1) the total number of shares purchased as part of a publicly announced repurchase plan or program, reported on a monthly basis and by class, (2) the total number of shares purchased, (3) the average price paid per share, and (4) the maximum number of shares yet to be purchased under the plans or programs, in addition to footnote disclosure of the principal terms of all publicly announced share repurchase programs.

On December 15, 2021, the SEC approved the proposal by a vote of 3-2. Commissioner Peirce and Commissioner Roisman both issued dissenting statements, with Peirce describing the proposed rules as including “painfully granular, unnecessary frequent disclosure obligations.”5 Hester M. Pierce, Commissioner, Sec. & Exch. Comm’n, Dissenting Statement on Buybacks Disclosure Proposal (Dec. 15, 2021), https://www.sec.gov/news/statement/peirce-buyback-20211215.  Taken together with the proposed cooling-off period under Rule 10b5-1, the proposed rules requiring daily reporting plus enhanced disclosures create a number of potential issues for companies.

If and when approved, the requirements of the new and revised rules regarding Rule 10b5-1 plans and company share repurchases will implicate several everyday corporate practices.  In advance of final rules being adopted, companies should survey existing policies and procedures.  Particularly in the case of Rule 10b5-1 plans where we have seen general bipartisan support and the SEC is expected to move quickly to adopt final rules, companies should consider incorporating key aspects of the proposed rules into current practices.