A forward sale of common shares is an offering that is agreed upon today with a settlement date in the future. Forward sale agreements allow companies to capitalize on current trading prices by locking in a price at which it can sell shares to a forward purchaser – typically an investment bank – in the future. The delayed issuance provides flexibility to the issuer without a “drag on” performance measures (e.g., funds from operations) or shareholders incurring immediate economic dilution (i.e., dividends and earnings per share). These agreements are typically used to fund transactions where the timing of the closing or capital need is uncertain, including funding a transaction over time, as yet unidentified acquisitions, or future development opportunities. The transactions can also be structured to permit repayment of borrowings and for general corporate purposes. In addition to the variety of ways to use a forward sale, these agreements have a number of benefits that may be particularly attractive for REITs. These benefits are particularly useful for REITs, where the need to fund capital expenditures usually takes place over time, as opposed, for example, to a onetime acquisition cost. Additionally, these agreements protect REIT shareholders by mitigating share dilution during periods in which the capital associated with the issuance would not otherwise be put to work.

The forward contract can then be closed out in one of two methods that allow the forward purchaser to close out its borrowing position.1The SEC has provided relief in a series of no action letters confirming that the settlement transactions by the forward purchaser do not require separate registration with the SEC (see Goldman, Sachs & Co., SEC No-Action Letter (avail. Dec. 20, 1999); Goldman, Sachs & Co., SEC No-Action Letter (avail. Oct. 9, 2003)). 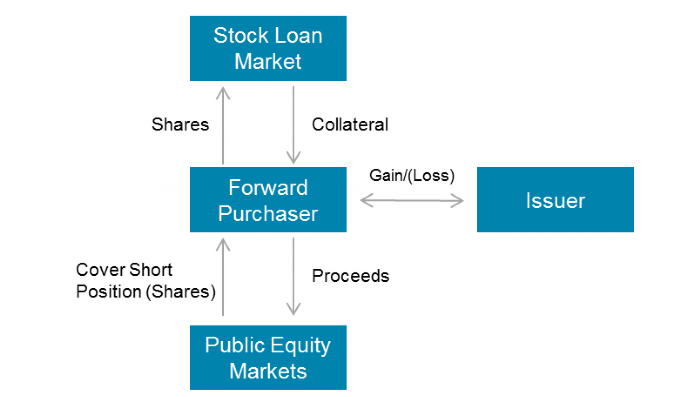 Importantly, from a tax perspective it seems clear that REITs will not recognize any nonqualifying gross income under any form of settlement of a forward sale agreement. In the simplest case, where the REIT physically issues shares to the underwriter to settle the forward, no gain or loss would be recognized under section 1032 of the Code, which provides that no gain or loss is recognized on a corporation’s issuance of stock in exchange for cash or property. Even if the shares issued by the REIT have a value at delivery less than the amount paid under the forward contract, this provision should prevent any gross income from being recognized. The same result should apply if the forward contract is settled for cash. The IRS has consistently taken the view that the net cash settlement of a derivative contract with respect to an issuer’s shares should be taxed the same as physical settlement under section 1032.2For a historical synopsis of this issue, see Chief Counsel Advice 200832022 (Apr. 23, 2008), which concludes that “the Service interprets § 1032 as applying to forward contracts, whether or not stock is actually transferred, where gain or loss is determined based on the value of the taxpayer's own stock.” Accordingly, no gain or loss should result, even if no shares are issued.

Including a forward component as part of an equity strategy provides REITs with security that the equity need created by a potential investment is not only funded, but also that the need for the proceeds will match the timing for the issuance of the shares. To avoid market uncertainty, mitigate share dilution and gain flexibility, REITs may consider adding forward sale agreements to their overall capital plan.

Spencer Stuart, a leading advisory firm focused on executive and director leadership, recently released its annual Board Index Report, which is among the leading publications analyzing board governance trends among S&P 500 companies.  While not specific to REITs, the trends outlined in Spencer Stuart’s report often reflect a shifting standard for “best practices,” particularly in the areas of corporate governance and board leadership. Publicly-traded REITs in particular may find these data points helpful in gauging whether their organization is responding appropriately to governance trends. Some highlights from the report include: