A comparison between the current rule and the proposed rule is provided below. The agencies propose as a “baseline concept” that “waters of the United States” are waters within the ordinary meaning of the term, such as oceans, rivers, streams, lakes and ponds, and wetlands, and that not all waters are “waters of the United States.” The stated intent of the revisions is to establish “bright line jurisdictional boundaries” that are “easily implementable.” Notable changes include the following:

Formal notice of the proposed rule will be published in the Federal Register shortly, opening a 60-day comment period. We expect a contentious and highly publicized rulemaking, with legal challenges to any final rule a certainty.

In addition to considering whether to comment on the proposed redefinition, clients subject to Clean Water Act regulatory programs should consider the potential effect of any final rule on existing jurisdictional determinations, permits, and compliance plans. As federal requirements contract, such documents should be reviewed to ensure they do not retain unnecessary obligations or liabilities. This is important, because non-compliance with any element of such documents—potentially including elements no longer required—could create exposure to citizen-enforcement suits and significant federal statutory penalties.

Clients interested in learning more, in evaluating and commenting on the proposed redefinition, or in determining how existing compliance should be revised after adoption of a final rule, are invited to contact any of the attorneys on the first page of this alert, who have extensive experience with the Clean Water Act from a litigation, project planning, and permitting perspective, and who also assist clients in the legislative and rulemaking process. 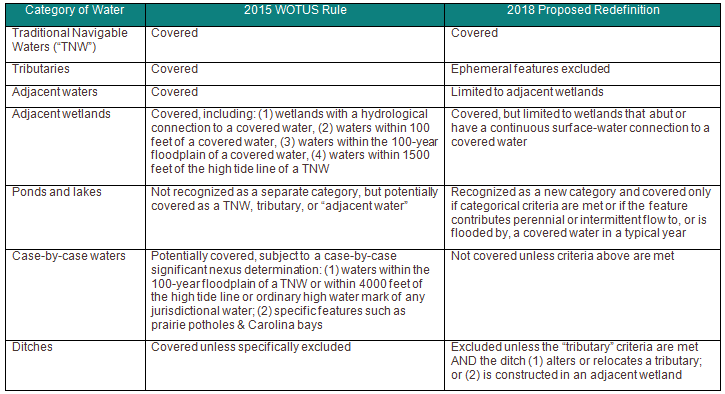